Our day out at The Baby Show!

Friday we headed to The Baby Show at Earls Court. I didn't go on my own, I took Xander and my pregnant friend Iwona. I went to the show in the capacity of a registered show blogger and was lucky enough to win a ticket with NCTBaby for my friend!

In an ideal world I would have braved driving, but the thought of driving in inner city London feels me with dread so instead we went by train. We opted to do the route overground and avoid the tube and the journey there was quite straightforward. Going from Farnborough Main station we changed at Clapham Junction and got off at Brompton West and walked just a few minutes to Earls Court. This was our first trip out on the train and I was surprised how accommodating the train staff and fellow commuters were to help us, with people offering to help us on and off trains with the buggy.
As it was Xander's first trip in a train I had to document it with a pic:

On arrival we presented Iwona's ticket and then I registered at the Press Office for my bloggers pack and wristband (which allowed is entry into the exhibitors lounge) and then began browsing the show.
We found lots of bargains and quickly started loading up the basket under the pushchair and bags!! (See my previous blogpost for suggested retailers) and also booked for the baby first aid session ran by The Red Cross. We also had the opportunity to hear Professor Robert Winston lecture on child development which was really interesting (he's a particular favourite of mine, I love The Child Of Our Time documentaries and show them to my students in my Sociology lessons!) so it was a real experience to see him in the flesh!:

About 1pm we was ready for some lunch and so took advantage of my Press wristband and entered the exhibitors lounge which was less busy for a cold drink and some food.

Something quite exciting was going on there: a series of pitches from up and coming baby companies to a panel of judges including Tom Pellereau (winner of The Apprentice 2011) We was lucky enough to get to meet him and even have a cheeky pic taken with him!:

After this we headed back to the show and attended the pre booked free first aid session. I thoroughly recommend this. The session was really well done and interactive, allowing you the opportunity to practice on dolls techniques to assist when a child is choking, CPR techniques and how to deal with burns. I feel we learnt a lot in such a short space of time and feel I could confidently use the procedures in case of an emergency with Xander. (Xander was so well behaved throughout the half hour presentation) In fact he was brilliantly smiley and happy throughout the whole day!)

After the session we headed back to do more shopping! I also had the opportunity to meet with several retailers that I have tweeted with regularly! It was lovely to put a face to (often sometimes crazy) Twitter aliases aswell as make some new contacts!

Our final highlight was the opportunity to meet and speak with Annabel Karmel who gave me some wonderful advice regarding weaning Xander given the possibility that he may also be a celiac and require a gluten free diet.

We left right at the end of the show, but could have easily stayed longer we had such an enjoyable day. However by leaving at that time we hit the awful commuter traffic. The journey home was completely chaotic. For some reason the direct train from Clapham Junction to Farnborough Main was cancelled meaning we had to take several trains to get home and getting on and off a busy train again and again with a loaded buggy was exhausting. But it was completely worth it for such an enjoyable day!!
Posted by Amy Tidd at 09:03

Amy Tidd
Hi my name is Amy Tidd, I'm a full time teacher, wife to my lovely hubby and first-time mummy to Xander!I have a major craft addiction and LOVE Stampin' Up! and became a demo two years ago. I have a craft blog: www.craftythinker.blogspot.com where i intend to show off my creative side and my mummy blog: www.mycraftymummy.blogspot.com which I hope to share my journey of being a mummy and to offer tips and advice to those embarking on motherhood for the first time! 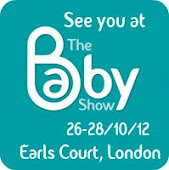